On 19th July 1928, 30 ladies and one man met to establish Perth Ladies Golf Club. The man was Mr W Grieve who ran a golf shop in Perth and convened that first meeting. A committee was formed and the annual subscription for the first year was set at 2/6d (12.5p). There had been an earlier, but less successful, attempt to form a ladies’ golf club in 1870. The Perthshire Advertiser reported on their first competition where “the fair golfers made a most creditable appearance, given the state of the ground and that this was their first trial of skill”. However, apart from one other reference, little more was heard of that early foray by the ladies into golf on the North Inch.

We are pleased to report that the 1928 incarnation of Perth Ladies has proved to be of sterner stuff, with an uninterrupted history over 90+ years and is still going strong today. Over the years the club has had its base in a number of premises ranging from the Artisans clubhouse; rooms in a solicitor’s office; and a basement in Rose Terrace until we found a more permanent home with a clubroom in Bell’s Sports Centre.

At the start in 1928, competitions were organised by the committee and within the first year, various trophies had been promised or presented to the club. A photograph of the prize-winners in1928 shows the ladies with five trophies on display, which are still played for today. Many more have been donated by past and present members and others, and we now have 27 trophies awarded annually. 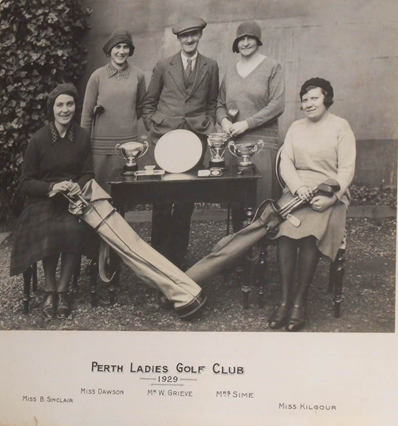 Soon after its formation, Perth Ladies started playing inter-club matches with local clubs. Sadly, the first game against Craigiehill Ladies in 1929 produced an ignominious score of two draws and 14 defeats. However, credit must go to the club for being able to field a team of 32 players in a two-ball foursomes. Similarly, club members have, for many years enjoyed a range of annual outings. Other characteristics of the club that were commented on in the early days were the friendly atmosphere and home baking at Open competitions. There has been no drop in the standard of either in the current day.

Membership has fluctuated over the years, reaching a high of 114 in 1992. Numbers fell off in the early years of this century when the condition of the course was an issue, but the course has improved almost beyond recognition and membership increased again. Fees have also increased since the heady days of 2/6d, though only reaching £1 by 1967 before inflation started to bite. Nevertheless, Perth Ladies continues to offer affordable and accessible golf as we look forward to our centenary in 2028. 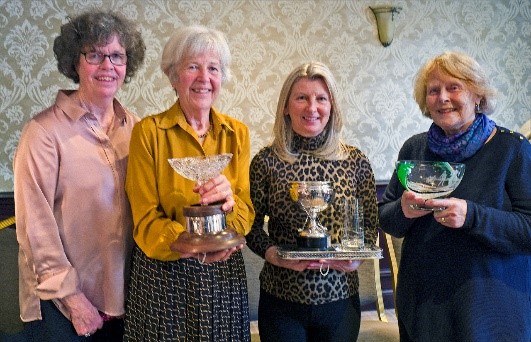 The above is a very abridged version of ‘Perth Ladies Golf Club 1928 to 2018’ written by club member and former Captain, Marjorie Clark, to mark the 90th anniversary of the club.